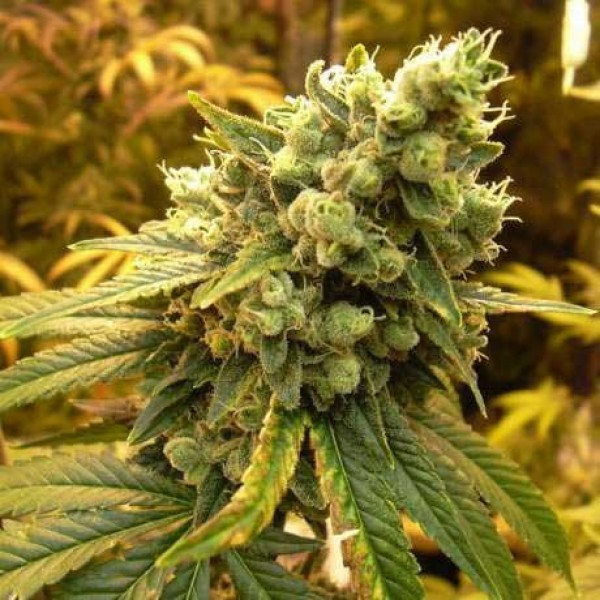 Since the early 90s, the Sour Diesel strain has been “raising a stink” in the cannabis community…in a good way! Nowadays, there’s no way tokers could claim they love gasoline strains without trying this pungent sativa hybrid. However, that doesn’t mean you need to grab THC-laden Sour D to experience this strain’s citrus-forward flavors. As the hemp market continues to expand, growers have developed novel ways to replicate Sour Diesel’s genetics in a high-CBD form. Hemp Sour Diesel has all the gasoline aromatics from the original without sky-high THC percentages.

To this day, there’s a lot of controversy surrounding Sour Diesel’s origins. Although most people agree this strain first exploded on NYC’s 90s cannabis scene, nobody knows who first created it. Some people believe a local breeder called “AJ” deserves credit for Sour D, but we may never know for sure.

Unfortunately, since Sour D’s origins are so mysterious, it’s impossible to say the exact strains that went into this hybrid. However, the most plausible theory is that Sour D’s parents are the equally popular hybrids Chemdawg 91 and Super Skunk.

Arguably, there are more questions surrounding the origins of Chemdawg 91 than Sour Diesel. Supposedly named after the year it was created, Chemdawg 91 seems to be a mix of Thai landraces with hints of either Northern Lights or Kush. Whatever the truth may be, this hybrid leans sativa and typically has a pronounced gasoline flavor profile. Unsurprisingly, most people believe Sour D’s industrial terpenes come from Chemdawg 91.

It doesn’t take a ganja genius to guess what Super Skunk tastes like. This fusion of Skunk #1 and Afghani has all the dank, cheesy flavors you’d expect from a Skunk strain. Interestingly, most reports suggest Super Skunk is slightly indica dominant, and many people use it to wind down later in the day. Apparently, these body-heavy effects didn’t transfer to Sour Diesel.

To be frank, Sour Diesel’s appearance isn’t anything to write home about. While this strain isn’t ugly, it’s probably not the first flower you’ll see pictured in prominent hemp advertisements. Most often, Sour D cultivars are predominately dark green with a sprinkling of amber pistils. Sour Diesel also has a respectable layer of trichomes, but it lacks the sugar-white frosting you see on strains like White Widow or Gorilla Glue #4.

Overall, Sour D looks like a typical wispy sativa bud. But please don’t let these lackluster looks fool you! What Sour D lacks in appearance, it more than makes up for in flavor and effects.

In marijuana circles, Sour Diesel has always been well-known for its high THC content (~26 percent). However, when you order a hemp version of Sour Diesel, you should expect higher CBD content with ≤ 0.3 percent delta 9 THC. Hemp naturally has low THC levels, which helps provide smokers with a non-psychoactive experience of their favorite flowers.

The best way to figure out a hemp strain’s CBD content is to ask the manufacturer for a Certificate of Analysis (aka COA). These third-party lab results are the best way to gauge a strain’s cannabinoid and terpene percentages.

What Is Sour Diesel’s Aroma & Flavor?

Before you bust open a bag of Sour D nugs, prepare your nose for a blast of pungent aromatics. Sour Diesel typically has strong traces of the terpene limonene, which accounts for its intense notes of citrus and gasoline. It goes without saying Sour Diesel isn’t the best strain if discretion is a primary concern!

As you smoke Sour Diesel, you’ll notice both tart and industrial flavors front and center. Some users also detect hints of skunk and aged cheese, most likely from this hybrid’s Super Skunk lineage. Underneath these harsh and dank aromatics is a mellow “earthy” undercurrent that provides a bit of balance.

What Are Sour Diesel’s Standard Effects?

Sour Diesel is unabashedly sativa. Indeed, most tokers consider Sour D to be the best “wake & bake” hybrid. A few seconds after taking their first hit, smokers tend to feel a head-buzz sensation followed by euphoria and increased stamina. So, yeah, this is one strain you should only use early in the day!

Although CBD Sour Diesel isn’t as intense as its marijuana counterpart, it can take inexperienced users off-guard. New smokers should start slow with Sour D and see how their body reacts. A few side effects to watch out for include lightheadedness and increased anxiety. If you feel Sour Diesel is too intense, you may want to experiment with a 50/50 hybrid or indica strain.

How Difficult Is It To Grow Sour D?

Just as smoking Sour Diesel isn’t ideal for newcomers, growing Sour D seeds isn’t great for new cultivators. Most cannabis farmers say Sour Diesel is “moderately difficult” with an average flowering time of 11 weeks. As a sativa, Sour Diesel can grow skinny and tall with a height of about seven feet. This tall stature makes Sour Diesel tricky to manage in small grow tents, unless you have experience with Low-Stress Training.

Another issue to be mindful of is mildew. While mold could affect any cannabis strain, Sour Diesel seems to be extra susceptible. Growers must keep their grow space immaculately clean and constantly inspect plants for signs of mold. It’s also crucial to keep Sour Diesel in a consistent Mediterranean climate around 68 – 76° F.

Average yields for Sour Diesel plants are about 1 – 2 oz per ft2.

What Are Similar Strains To CBD Sour Diesel?

Sour Diesel is the undisputed king of gasoline sativa strains. However, that doesn’t mean there aren’t many other hemp hybrids with similar flavors and effects.

Here are a few trendy CBD hemp strains that have a pungent punch:

Considering its status as a classic hybrid, Sour Diesel has attracted plenty of praise over the years. Here are just a few popular comments from authoritative cannabis sites:

No strain does diesel better than Sour D. People who love gasoline aromatics mixed with plenty of skunk won’t have any complaints smoking well-cured Sour Diesel nugs. As a sativa-forward hybrid, Sour Diesel is also an excellent choice for people who want a strain that could melt morning fatigue. Now that Sour D is available as a hemp cultivar, it’s easier for newcomers to experience these flavors without worrying about THC overexposure.