How To Use A Bubbler: A Bubbly Good Time 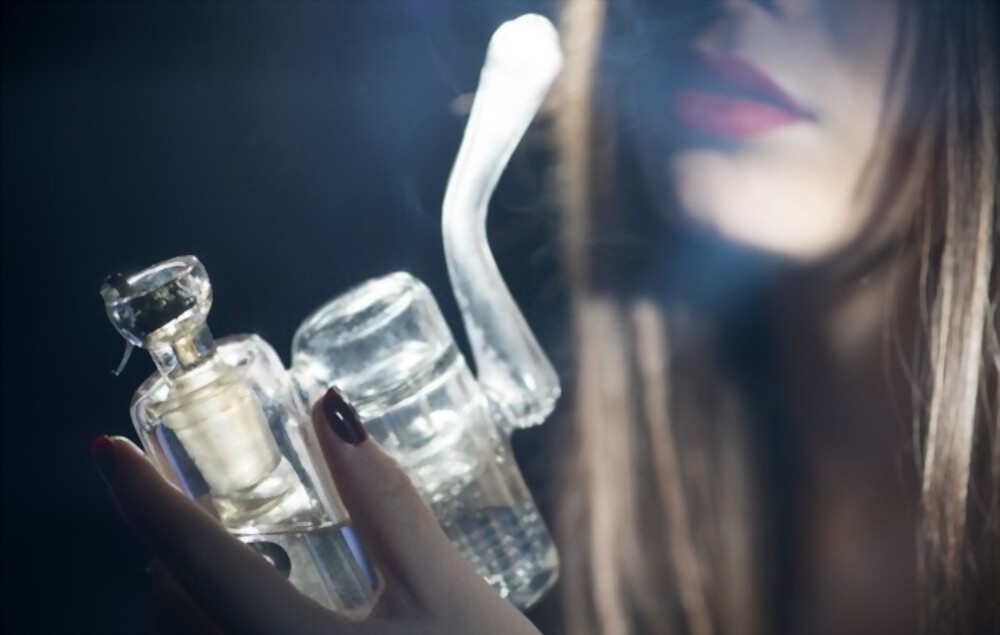 Look! In my hand – is it a pipe? Is it a bong? No, it’s a bubbler! And like Superman, it’s a super smoking accessory.

A lot of people are just getting introduced to bubblers, but many hippies and stoners remember the bubblers from back in the day when it was a rare, magical and precious smoking device, often as beautiful to admire as to smoke from.

As marijuana enters the mainstream, bubblers follow. With so many ways to smoke – joint, pipe, vape – why choose a bubbler? This article will inform you about bubblers so you can make the best decision for yourself.

Contents hide
1 Bong On The Go
2 So What’s The Difference?
3 Bubbler Breakdown
3.1 What Is Percolation?
4 Best Of The Bubblers
5 How To Bubble Without Trouble
5.1 Selecting Your Strain
5.2 The Grindy Grind
5.3 Pour The Water
5.4 Puff Puff Pass
5.5 One Final Step
6 Cleanliness Is Next To Cannabis

Bong On The Go

What is a bubbler? Is it a bong on the go? Sort of. It is a water pipe -which is the technical term for a bong. It takes water like a bong but is shaped and smokes like a traditional pipe. You could say it is kind of a portable bong.

The bubbler certainly sounds like a bong when you wrap your finger over the carb and inhale. That’s where the device gets its name – the bubbling sound.

Bubblers are indeed a descendant of the bong. Here’s a quick fun history lesson to share with your buds after you’ve bubbled up a tasty bud together.

The first bongs were made of bamboo. That’s the etymology of the word bong – it comes from the Thai word ‘baung’ which refers to a cylindrical tube made of bamboo wood. The idea of putting water in the tube was introduced in the area known as Silk Road, during the Ming Dynasty.

That was in the sixteenth century. The bubbler came to fruition centuries later in the 1970s, when glass blowing as a cannabis related art form was developed.

So What’s The Difference?

Of course, there are key differences. Some of them are advantages, others are not. But both a bubbler and bong do the same important thing: cool the smoke.

The disadvantages of a bubbler are really to be found in comparison to a bong. Because a bubbler is just one piece – no slide – you can’t customize it and it can be harder to clean, because you can’t take it apart.

The bowl heads on a bubbler do tend to be smaller. This is only a disadvantage depending on how you look at it and what kind of stoner you are. Some smokers like to make their bong even cooler by adding ice, but this is not possible with a bubbler.

The advantages far outweigh the disadvantages. For one thing, there’s the portability factor. Bubblers are also easier to conceal. There are no extra parts to lose. Hits are smaller but smoother and taste better.

Plus, a bubbler works without water. Kind of like when an escalator breaks down, it just becomes stairs. Props to Mitch Hedburg for pointing that out.

Side note: If you need some funny entertainment when you’re done bubbling, check out some Mitch Hedburg clips. He is a super silly, smart and funny stand-up comedian. He used to smoke a lot of pot. He still does, but he used to, too. Well, not anymore, tragically, he is no longer with us.

We had a history lesson, now let’s dive into science! Anatomy, specifically. Time to study the parts of a bubbler. Marijuana makes science fun!

The four parts of a bubbler are: the mouthpiece, where you take long luxurious, clean-tasting puffs of cannabis smoke. A bowl, where you pack up the tasty treat. The chamber, where you put the water. And the stem, which the smoke travels through to reach your lusty lips.

But don’t forget the carb, man! If you are on the keto diet, carbs may be bad for you, but in the case of a bubbler, it’s good for you. Very good. The carb creates percolation.

Instructions for using each part will come later. The science lesson isn’t quite over.

Let’s take a minute to explain percolation, so this article makes you sound smarter.

The bubbler cools your smoke using two concepts: heat exchange and dissolution. The water breaks up the smoke so it can cool faster. At the same time, the water is filtering out the bad stuff. So it’s both healthier and more pleasant.

Best Of The Bubblers

Now you know how a bubbler works and that sharing one will make you look cool and classy in front of your friends. But only if you pick out the right one. Bubblers come in all shapes and sizes and you want to choose one that reflects your style.

Details are one exceptional quality of bubblers. The glass just looks so…pretty and stands out. Many artisans will add extravagant touches like a glass lizard or bird crawling on the glass. Really unique designs are out there and worth finding.

There are different kinds of bubblers. Here’s a list:

One suggested accessory is a nice plush carrying case for it, that zips up. Something with a felty material that zips up easily and has some padding inside. Extra pockets for your stash and a lighter are a plus.

How To Bubble Without Trouble

There are some simple steps for getting the best performance possible from your bubbler.

Probably most important. A strain rich in terpenes would especially benefit from a bubbler because they deliver such clean taste. More dense strains are also well-served by bubblers because they can be harsh and the filtration smoothes them out.

Next, depending on the size of the bowl, grind your weed. You will be well served by taking this extra step. You can choose how fine a grind you prefer. You run the risk of pulling too hard and spilling water or hurting your throat and having an unpleasant experience if the weed is packed too tight.

On the other hand, if it is ground into too fine a powder, it will burn faster and the pleasure of a slow, steamy pull will be lost. It’s a fine line getting it just right. Grind lightly at first so you keep some control.

This can be trickier than it sounds. Sometimes it’s difficult to see inside the chamber. Plus you will have to use one of the three holes that are for other purposes – the hole in the bowl, the hole on the mouthpiece, or the carb. You can’t just stick it under the faucet like a bong.

Getting the mouthpiece too wet can feel yucky. Getting the bowl hole, well obviously, can get the weed wet. The carb is not anatomically proportioned to receive the water.

Solution? Pour slowly in tiny dashes, like pouring hot tea. Slosh it around and make sure it is not splashing out. Care goes double if you are a first-timer.

It’s not as easy as pulling on a bong, which is why it’s worth taking a minute for a quick how-to. But keep in mind puff puff pass still applies! Especially if you are alone.

First of all, wrap your thumb around that card. Don’t pull as hard as you would on a bong. You just want to fill the chamber with smoke. You should hear the bubbling. Then release the carb and take a deep inhale.

How long you choose to hold in the smoke is up to you. They say it’s just a myth that holding it in longer gets you higher, but they might be wrong.

If you selected a tasty strain, take a moment to let the aroma roll around your mouth like you would a fine wine. Savor it.

Some etiquette: After you take the deep inhale, turn your head away from the mouthpiece, especially if it’s your first time. It’s embarrassing to cough into the mouthpiece and everybody will know right away that you’re an amateur!

PRO TIP: Keep the flame cornered with your hand to control the burn so you don’t blaze away your stash in one swift breath. Also, you can take little quick puffs by moving your thumb quickly on and off the carb while inhaling sharply in between to control the size of your hit.

Final faux pas to avoid: pocketing the lighter! Don’t you hate that? When you buy a lighter and somebody pockets it that day? Sometimes it seems like the world is just one big lighter go round and nobody ever actually buys a lighter, but that’s a pipe dream and you hate it when it happens to you so don’t do it to others.

Enjoy the buzz! Pretty much like any other method of smoking. Sit back, have some munchies, listen to music. Whatever your pleasure. You do you, boo!

Cleanliness Is Next To Cannabis

Here’s another pro tip: Keep it clean, y’all! Best to clean your bubbler before and after each use since a bubbler tends to get dirtier quicker. If you let the funk build up, it will be a hassle to clean because it is one piece.

Cleaning it is simple. Mix an alcohol (rubbing alcohol not tequila) and salt solution. Then pour it in, shake a little to swish it around while holding your fingers on the open holes and dump it out. Let it dry in some fresh air before your next session.

Be careful where you store your bubbler and even where you place it when you’re not passing it. Bubblers are easily tipped over. Risks of neglect include spillage – dirty smelly water spills – and cracking the glass.

That’s it! Now grab some bongos and your bong on the go and get the good times bubbling to the surface!